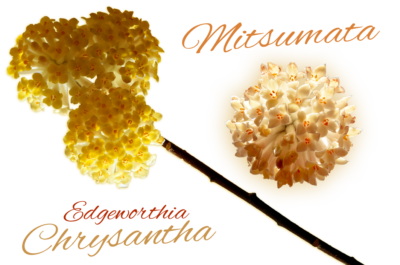 Edgeworthia Chrysantha (三叉 – Mitsumata) is a deciduous shrub from the Himalayan region of central and southern China.

It got its name because it has three branches, and the bark of the branch is used as raw material for paper and Japanese banknotes.

In Japan the yellow flowers bloom from late February to March. Some species have orange to vermilion flowers, and are called Akabana Mitsumata (赤花三叉).

End of February to March