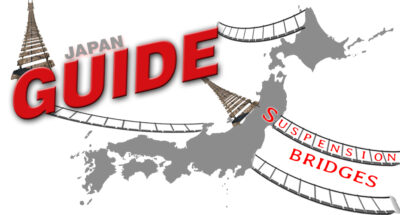 The Japan Guide aims to present a list of interesting suspension and cable-stayed bridges in Japan. Come and live the experience of crossing a pedestrian bridge suspended over rivers or mountains on foot.

Both the suspension and cable-stayed bridges have masts and a deck.

On the Suspension Bridge there is a main steel cable and hanging cables (vertical), which are connected perpendicularly to the deck. The main cable of the suspension bridge runs from one end to the other, held by the masts, and takes the form of a catenary. While the vertical component of the forces is received by the masts, the tension forces are balanced by anchor blocks, which are attached to each end of the main cable.

In the Cable-Stayed Bridge, the stays that come out of the mast are anchored directly to the deck in anchoring niches. Due to their angulation, they can come out from the same point at the top of the pole, fan-like, or come out parallel from the pole, like harp.

There are suspension bridges across Japan, the longest being the Kobe Akashi-Kaikyo Bridge, with a total length of 3.911 meters. Responsible for linking the city of Kobe to the main Japanese island of Honshu with the island of Awaji on the other side of the Inland Sea, the bridge was built to cross a dangerous canal that was previously crowded with ferries and was the site of tragic shipwrecks on stormy days.