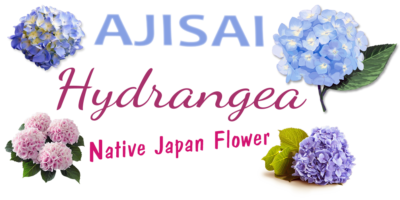 The Hydrangea Flower (アジサイ) is native to Japan and China, scientifically known as Hydrangea, with an approximate height of 1 to 2.5 meters with large and shiny leaves, it has a color variation in the flowers, according to the soil where the plant is planted.

Japan is a country where hydrangea is found in abundance, from early June (early summer), a period marked by the incidence of rain.

Where there are hydrangeas, there is beauty with a climate of enchantment, as this plant gives abundance to its flowers in a vigorous and harmonious way. The blue color, rare among the other flowers, is a common feature among the types of hydrangeas, a hallmark of the amazing hydrangeas.

The color of the flowers varies between shades of pink, blue, purple, white and lilac, according to the pH level of the soil in which it is planted, and corresponds to its acidity level.

Hydrangeas also have a peculiar feature, an active ingredient that can make them poisonous. The cyanogenic hydrangein glycoside is a poison that, if ingested in large amounts, can cause serious problems.

Its name comes from Latin, which means “gardener” or “one who cultivates gardens”. The name refers to the symbology of flower cultivation, which conveys the feeling of beauty and youth.

From Beginning to End of June